We had an awesome 2 weeks ministering in NC and MN.

The week of July 8-12 we ministered at a Camp in Blowing Rock, NC and saw an outpouring of God’s love on all that attended. Almost the entire camp was on their faces worshiping God and experiencing his love and presence several times during the week. 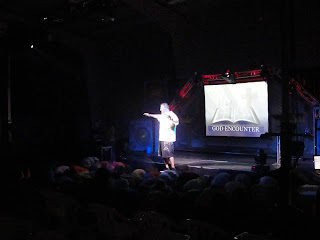 Children in Blowing Rock, NC on their faces seeking
more of God and experiencing his love for them.

During the week of July 15-18 we ministers in Fergus Falls, MN and saw over 100 people come forward to be born again including several parents. It was a powerful week spiritually in this small community. Many children attending were from the community and other churches that do not teach salvation. We saw lives touched, people delivered from chains of bondage, and encouraged to start growing spiritually.

The Jubilee Gang came to the Naz in Fergus Falls, MN for four nights of Summer Slam for kids ages 5-12.  It was a great week for the Kingdom of God as 100 people came forward to be born again—-two of them being adult workers/parents of the kids attending!  One mother/worker was the first one to come forward to pray one night after her two adopted children were born again a few nights before.  There was much spiritual warfare going on with this particular family prior to Summer Slam and especially prior to the mother getting saved.  That evening right before we started Jerry was able to powerfully pray for this woman to rebuke the work of the enemy in her life.  She was saved that evening.  She now says she is overflowing with peace, joy, hope, strength and too many other things she can’t even put into words!  This is what it’s all about!  The 170+ kids who came throughout the week loved every aspect of the Jubilee Gang’s ministry and they listened better than I have ever seen before!  We had feedback from our workers on how clear the explanation of being born again was each night and how carefully Jerry handled the altar call.  Our workers liked that it was fun yet more challenging for the kids spiritually than our normal VBS’s that we have done in the past.  I cannot  say enough good about Jerry and his wife Candy and the work they do to reach kids and their families for Christ.  The only regret I had was making this solely a kids event and not a family event.  Parents really need to be saved too as so many don’t know Him yet they are three to four times more influential on their children than even the church.  Think of how many kids we will hold on to in the church if we also have their parents!
Lisa Hart
Children’s Minister
Fergus Falls 1st Church of The Nazarene. 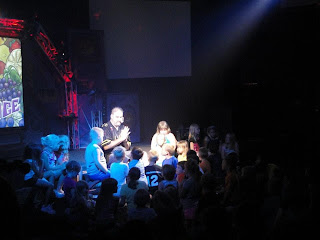 Jerry praying with 30 people to be born again
in Fergus Falls, MN 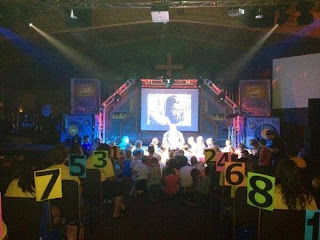 Jerry Praying with 48 people to be born again
in Fergus Falls, MN

We also got to hang out with our good friends Mark and Deb Harper  for their Sunday morning service on the way through MN. Mark is the author of the New Super Church 2.0 Children’s Church Curriculum that I highly recommend to churches. To find out more about this curriculum click on the following link. WWW.SUPERCHURCH.COM 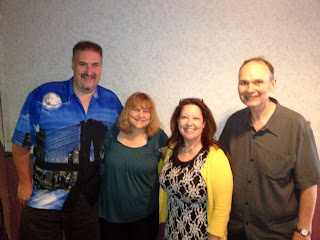 Jerry & Candy with Mark & Deb Harper at their
church in MN